Kundali matching- Superstition vs. Science- Explained through the Role of the Sixth House 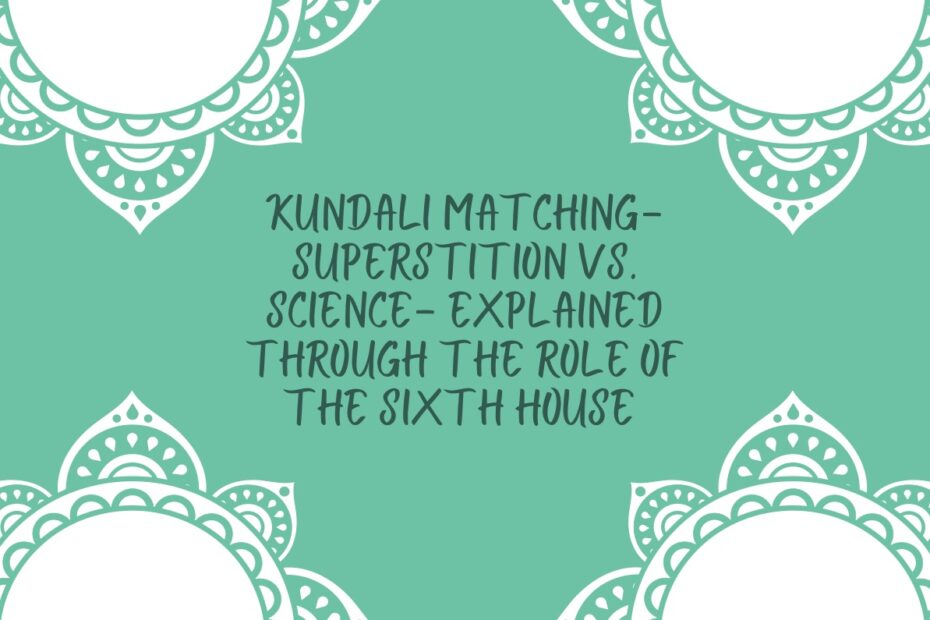 Kundali matching is an important ceremony that takes place before marriage is a necessary
determinant in the marriage taking place. India is a land of cultures, traditions, rituals, diversity,
and religion. All over the world, our country is known for the rich traditions it pockets within
itself. Most people tend to confuse the art of kundali matching with superstitious beliefs but it is
way beyond that. Let’s explore more about the debate between kundali matching being
superstition or science

Well, let me burst your bubble because kundali matching is nowhere close to being superstitious
beliefs as it involves a whole lot of knowledge regarding many stuff. For instance, the concept of
Janam Kundali is the basis of kundali matching. The Janam kundli of an individual is a snapshot
of the sky at the exact time and date when the individual was born. It translates to the positions
of planets in the sky. Each planet in our Jan kundali influences a certain aspect of our life. The
position of planets in the different houses of our charts determine how the sectors of life the
planets deal with will be affected. This article will explain the science of kundali matching
through the discussion and explanation about the sixth house in our natal charts.

Role of the Sixth House in Kundali Matching

The area of life the sixth house deciphers for a human being is unique and crucial. It is about the
health and well being of a human being. It also extends to the level of courage a human has
within himself and the attitude with which he faces the fights and struggles of life. Everybody
faces struggles, obstacles, and shortcomings in their lives. It is the sixth house that tells us how
we will face such struggles and whether we succumb to them or emerge triumphantly. Thus, a
benefic planet needs to be placed in the sixth house for these factors of life to be prosperous in
the native’s life.

Signs and Planets Associated with the sixth house

The sixth house of astrology is associated with the zodiac of Virgo as Virgo ranks sixth in the
realm of horoscopes. The planet Mercury is the natural signifier of the sixth house and the sixth
house is also a favorable position for Mercury to be placed. However, the sixth house has a weak
effect on the Sun, the moon, and the planets of Jupiter and Saturn.

Areas of Life that the Sixth House is concerned with

The central themes and issues that the sixth house deals with is the sector of employment and
service. The position of planets in the sixth house of our charts tells us what type of career we
will have, in which field we will work, which job suits us, and in which field we will be
successful. It also tells us about the kinds of colleagues we will meet, the work atmosphere we
will deal with, the kinds of seniors we will work under, our equation in the workplace, and so on.
The advice given by the sixth house of astrology is to keep your health in check, maintain
regularity, and lead a healthy lifestyle. Each house of astrology also deals with specific body parts. For the sixth house, it is the stomach, digestive tract, and intestine. Another strong
indication of a favorable placement in the sixth chart is of getting a job in the armed forces or
somewhere which involves protecting the nation.

Significance of the sixth house in kundali matching

As stated earlier, the sixth house translates to how an individual deals with the challenges,
struggles, hostilities, and obstacles he faces in life. A positive aspect of the sixth house will
enable the natives to be strong in the face of struggle and hardships and will bless them with the
courage to overcome such problems. The professions that the sixth house is related to are
healers, doctors, armed forces, police, society helps, and others. It also deals with important legal
issues, disputes, the concept of lawsuits, justice, and so on.
Health is also a crucial feature of the sixth house. It tells us whether we will be cursed with
certain illnesses or will be healthy and live long in life.