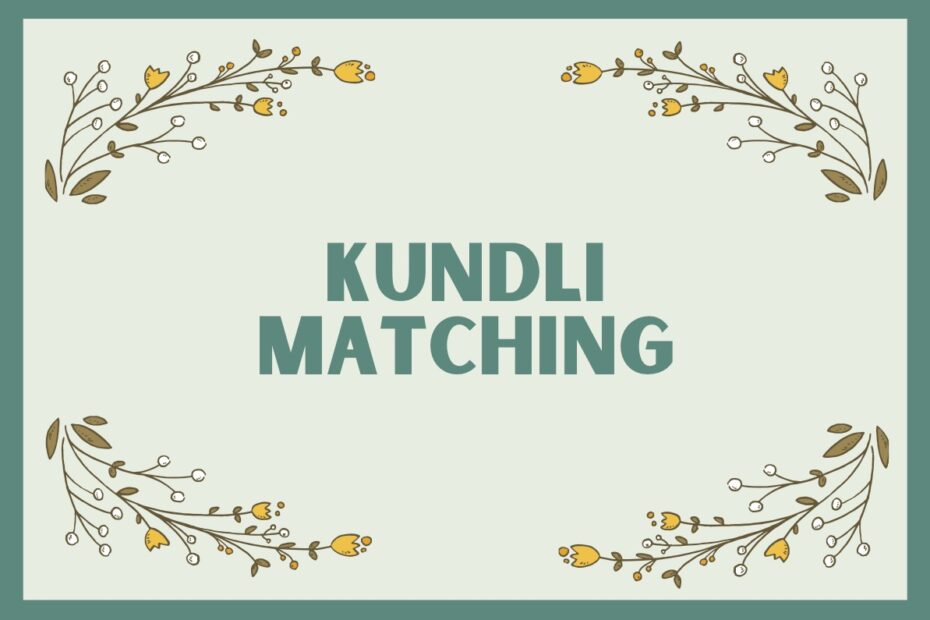 Vedic astrology is an ancient practice that has come down to us from hundreds of years ago,
there have been mentions of it even in the Vedas and the Puranas. Kundli matching is just
one intriguing aspect of it. Kundli matching basically entails comparing the two birth charts of
a would-be couple to see if the bride and groom are astrologically compatible and predict the
most likely path that their married life is to take. A person’s sun sign or star sign is the
constellation the sun was in at the exact time of the person’s birth.

While a helpful tool to check two people’s general energy towards each other, it is anything but sufficient to check only the sun signs of two people to accurately predict how they will get along. It is important
to check the degrees, aspects, placements of other planets, nodes, asteroids and a million
other things to even get a slight idea about the couple’s future together. In this piece of
writing, we shall focus on the much well known and well used Ashta Koota Milan process of
Vedic astrology in checking the compatibility of a couple.

The ashta koota milan is typically a north-Indian way of matching kundlis or birth charts. The
compatibility is measured along eight different parameters and each parameter is given
some weightage in the form of points. The total weightage after calculating all the
parameters is 36 points, the lowest weightage given to a particular parameter is one point
and the highest weightage given to an individual parameter is 8 points. The eight parameters
are Varna, Vashya, Tara, Yoni, Graha Maitri, Gana Maitri, Bhakoota, and Nadi. Each of these
parameters has a particular number of points associated with them which we shall see
shortly.

The best possible match for a couple is when they score a total of 36 out of 36, it is
said to be a perfect astrological match and their married life is predicted to be blissful.
The eight gunas of the Ashta Koota Milan method are discussed below in ascending order of
their importance in the sense of the number of points they contribute:

Varna: This particular guna is technically said to be the least important as it has the lowest
points attached to it. It holds only one point which is given when the varna of the bride
matches that of the groom. The four varnas are brahmin, kshatriya, vaishya and shudra. This
is indicative of how the two people’s egos interact with each other and whether they promote
or demote the other person’s motivations.

Vashya: This guna holds two points and is indicative of love and affection between the
couple. Each rashi is associated with a particular vashya, for example human, jalchar,
chatuspad, etc and points are given if the vashyas match.

Tara: This guna holds three points and is indicative of the overall physical wellbeing of the
couple. There are a total of 27 nakshatras or lunar mansions in the sky which have been
subdivided into 3 categories. Points are given if the nakshatras are compatible with each
other or if they match.

Yoni: This guna holds four points and is indicative of the instinctive sexual inclinations of
both the bride and the groom. Each nakshatra in this guna is represented by the symbol of
an animal and points are awarded according to the compatibility between these two animals.

Graha Maitri: This guna holds five points and is indicative of the intellectual compatibility of
the couple. The rashi or the moon sign is taken into account here and points are given on
the basis of compatibility of the rashi lords.

Gana Maitri: This guna holds six points and is indicative of the accumulated wealth, natural
outlook on life and the emotional temperament of the individuals involved. There are three
ganas- deva, rakshasa and manushya. If the ganas match, points are rewarded according to
that.

Bhakoota– This guna holds seven points and is indicative of the professional life of the
couple as well as their work ethic and general financial and professional prosperity post
marriage. The moon signs are taken into consideration and placed along fixed axises to
compare whether they are compatible or not.

Nadi- This is apparently the most important guna and holds eight points. It is indicative of the
physical appearance of the couple and their ability to procreate. If compatibility is strong in
this guna, it is easy to overlook other less important gunas.