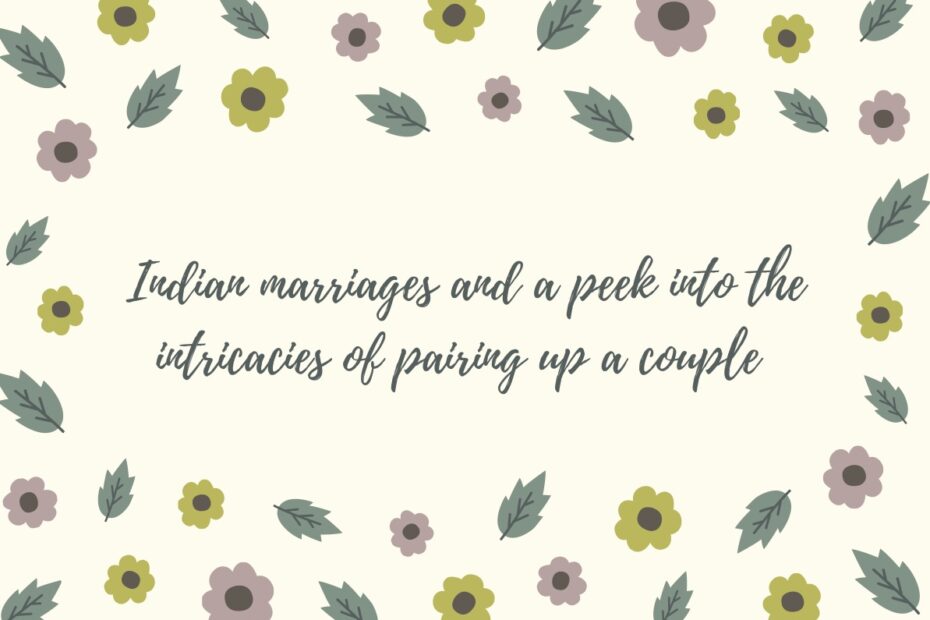 There are four stages of any person’s life as described by the Hindu sacred texts. They are
Brahmacharya – student, Grihastha – householder, Vanaprastha – retired, and Sanyasa –
renunciate. Each of these stages has a starting point. The starting point for the Grihastha
stage is marriage. As such, marriage is an extremely important and sacred event. To ensure
the longevity of a marriage, Kundali matching is done. The prosperity of the marriage is the
top priority because culturally, the marriage is much more than the alliance of the bride and
the groom, it is an alliance of the families of the couple. They should be able to integrate into
each other’s families to ensure happiness making Kundali matching even more important.

Arranged marriages – conceptualization and rise of the concept

It may come as a surprise but in the pre-Vedic period, marriages were based on the choice
of the bride and the groom hence, there was no concept of Kundali matching. Somewhere
down the line, the system of arranged marriage overtook the previous system to become the
primary custom. This is believed to be because of the use of marriage to ally with the
kingdoms. Marriage began to be used as a political tool to ensure friendly relations among
the kingdoms. Previously restricted to just the royal family, the custom slowly trickled into the
lives of commoners. Over the years, it became the norm and parents became solely
responsible for finding a spouse for their child. But how did the commoners ensure the
compatibility of the pair? Kundali matching is the answer.

The hows and whats of Kundali matching – a simplified explanation

A Kundali of a person is nothing but the birth chart of the person made at the time of birth. It
is made after taking into consideration the date, time, and place of birth. So Kundali
matching is nothing but matching these birth charts of the couple and the final “score” is
used to predict how well the couple would gel together. The process is quite complicated for
the laymen, so here is a simplified version – there are 8 “Gunas” or qualities, and each of
these Gunas has several categories. For each Guna, a person belongs to one of the
categories and this is shown by the Kundali. The Jyotish (the Kundali reading person) takes
the Kundalis of the bride and the groom and for each Guna matches the category they are
in. Each Guna has a specific score which on matching is added to the final score. It is this
final score that determines the compatibility of the couple in different facets of life. The
maximum score is 36. A score less than 18 indicated that the pairing is not feasible. A score
between 18 and 24 indicated an average, acceptable match, between 24 to 32 indicates a
successful and fulfilling marriage, and between 32 to 36 indicates an excellent match.

What is a Dosh and why do people talk about it while discussing marriage?

A person, if born under the influence of Mars, is believed to have a Dosh. The Doshas of the
couple are said to cancel the negative effects of each other. Hence, the couple must have
similar levels of Dosh. During Kundali matching, the levels of Dosh are compared. The
marriage of a Manglik person with a non-Manglik is said to be doomed. There will be an
initial Kundali matching where the Dosh is discovered. However, it is possible to correct a
Manglik Dosh. The most common method is a mock marriage of the person with Dosh to a
tree, animal, or inanimate object. This is believed to transfer the ill-effects of the Dosh onto the mock spouse freeing the actual spouse of any misfortunes. There exist other methods to
correct a Dosh too. After correcting the Dosh with any one of the methods, Kundali matching
is performed again.

Are there other things to consider while Kundali matching?

Yes, there is one other factor that plays an important role in Kundali matching. This factor is
the Strength of the Navamsa chart. Just as the birth chart or Kundali tells which planets were
present during the birth, the Navamsa chart tells how strong the influence of the planets and
is thus linked to Luck. Matching the influence of planets is extremely important to avoid
conflicting effects on the pair.