The Effects and Remedies for the Graha Maitri Dosha 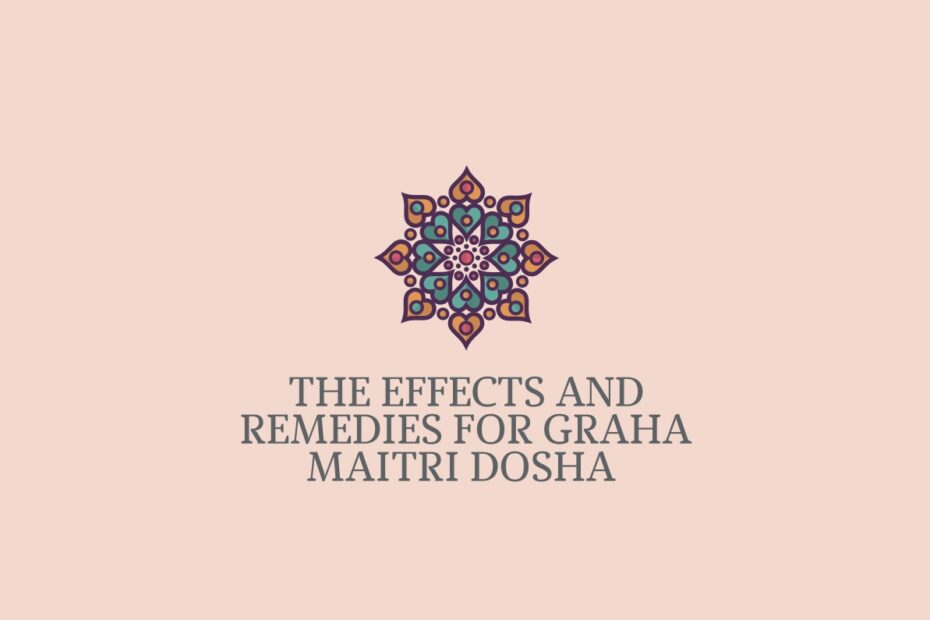 When a marriage in the Hindu community takes place, it follows several rituals. Apart from the
vast number of ceremonies that take place during the marriage, there also takes place a series of
rituals that lead to the wedlock in the first place. The most prominent of these rituals is the
kundali matching ceremony. In Kundali matching the horoscopes of the two people who are
going to be married are studied to test the compatibility levels which exist in the bond. This is
done so that the marriage is a successful and happy one without any problems or mishaps.
The kundali matching by date and time of birth and sometimes even the names of the bride and
the groom is considered one of the most auspicious processes that revolve around the institution of
marriage.
In North India, the Ashthakoota method is the most prominent method of kundali matching. In
this method, a total of 8 kootas are used to determine various aspects of a person’s life. These
include personality, health, wealth, progeny, and many other aspects which are important for a
pair to match. Among these 8 kootas are the Varna, Vahsya, Tara, Yoni, Graha Maitri, Gana,
Bhakoot, and Nadi Koota. Each kootas have different sores attached to it. The total score of this
kootas is 36. A score of 18 and below is considered to be an auspicious match whereas 18 and
higher have various degrees of auspiciousness attached to it. In this article, we will be looking at
the Graha Maitri koota and its effects and remedies.

According to Vedic Astrology, and the Ashthakoota Milan, the Graha Maitri Koota is the 5th
Koota among the 8 different kootas. This koota has a total score of 5 attached to it and
determines levels of mental compatibility and the presence of love and affection in marriage.
These factors are very important as every relationship must have levels of peace to work out a
smooth and balanced life. Good metal peace is important for the couple to trust and accept each
other in their bubble. This requires both the bride and groom to have common mindsets. A
marriage may be successful in all sectors like health, finance, progeny but if they do not think
alike, the marriage is bound to fall apart due to conflict of interests.
Thus, Graha Maitri Koota is a very important factor that contributes to a happy and successful
marriage.

Studies show that on an average 35% of marriages have an imbalance of the Graha Maitri factor
which leads to the formation of Graha Maitri Dosha. This means that most marriages may have
this dosha. However, this is one of the very few doshas that do not cause as much harm as the
other doshas due to its mild imbalances and prevalence of a large number of cases. However, it is
always good to consider it especially when it involves the mental health of the individuals. In
today’s technological age when the levels of stress are so high, depression and anxiety are
prevalent in almost half the percent of the population and are also a top cause of death through
suicide. Thus proper levels of heed must be provided to cancel the effect of this dosha.

The Graha Maitri dosha which exists in the kundlis of the bride and groom can be canceled if a
few conditions are met in the reading of the natal charts of the couple. These conditions are:
– If the effect of Bhakoot dosha is nonexistent. The bhakoot dosha is a powerful dosha that
can bring a lot of ill aspects to marriage. However, if this dosha is not present the Graha
Maitri Dosha between a couple can be canceled out.
– Kundali matching has a lot to do with the effect of Rashi’s and celestial bodies revolving
around the date and time of the birth of an individual. If the partners between who this
Graha Maitri Dosha exists has different Rashi’s but share a constellation in their natal
charts, the effect of the Maitri dosha is successfully canceled.
– In Kundali matching, the navamsa ascendant lord also plays a crucial role in deciding
various aspects. If this lord of both the individuals occupies a mutual planet or a common
friend, the Graha Maitri Doshas effect gets canceled.