NADI DOSHA AND ITS REMEDIES IN KUNDLI MATCHING. 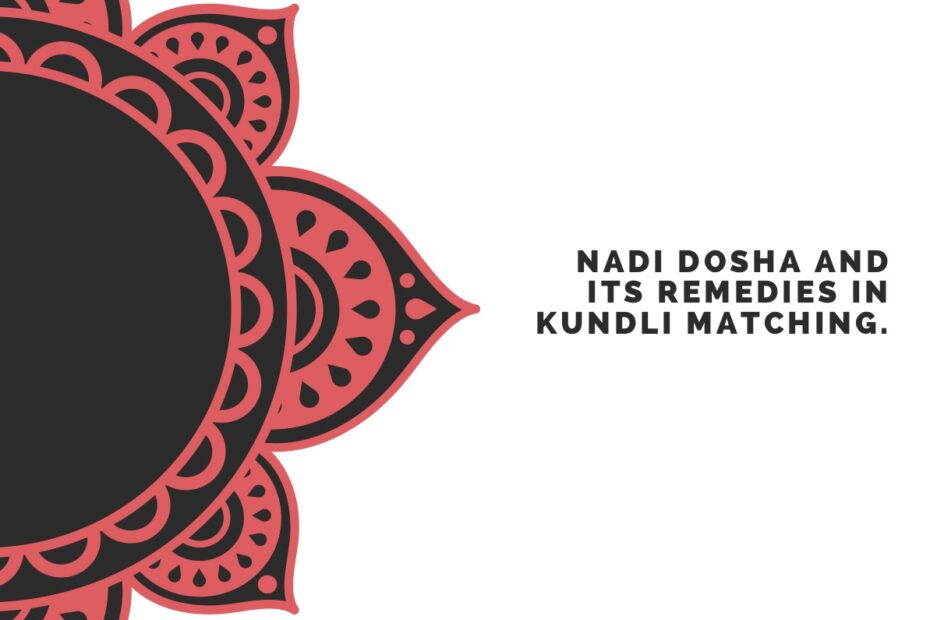 Nadi Dosha is considered to be one of the most inauspicious and troublesome doshas especially
in terms of kundali matching.
The presence of this dosha in your kundali might affect the upcoming generations in your
family. The effects can be issues in childbirth or having no children at all.
Nadi is one of the aspects of the ashtakoot or eight aspects of the Guna Milan process. It is the
the last aspect having the most number of points i.e. 8 points.
The matching of this factor between the girl and the boy, during the process of kundali
matching is very important, as out of the 36 points in the Guna Milan process this is the most
important aspect.
If there are any issues in the Nadi aspect of two persons then there might be the presence of
the Nadi dosha.
In the Guna Milan process, there are 8 properties or aspects also known as kootas or ashtakoot.
The eight aspects within this are namely e Varna, Vasya, Tara, Yoni, Graha Maitri, Gana,
Bhakoota and Nadi.
In the Nadi aspect, there are subtypes namely- Arya Nadi, Madhya Nadi, and Antya Nadi. Inner
person birth chart there is a particular constellation of that person’s piles which holds the
presence of the Moon.
There are 9 special constellations in the total of 27 nakshatras out of which either one of the
constellations have the Nadi aspect of the individual which also depends on the presence of the
Moon.

Nadi and its types:

Depending on your nakshatra, you can find which group of Nadi you fall into.
Adi / Vata: The nakshatras within this group are Ashwini, punarvasu, Uttara Phalguni, Purva
Bhadrapada, Jyeshtha, Moola, Hasta, Shatabhisha.
Madhya/Pitta: The nakshatras coming under this group are Mrisgashira, Purva Phalguni,
Anuradha, Dhanishtha, Bharani, Pushyami, Chitra, Poorvaashadha, Uttara Bhadrapada.
Antya/Kapha: The nakshatras that come under this group are Kritka, Aaslesha, Swati,
Uttaraashadha, Revathi, Shravani, Rohini, Magha, Vishakha.
In order to have the absence of Nadi Dosha, either of the partners should not have the same
Nadi. If both the partners have the same nadi then the offspring that will be borne will either be
abnormal or unhealthy.

The Nadi Dosha will be canceled in either of the situations:
– If the girl and the boy happen to have the same Rashi in their Nakshatra then the Nadi
Dosha is ruled out.
-If the Rashi of the girl and the boy are different but they have the same Nakshatra then
again the Nadi Dosha is canceled.
In the social class Brahmins and Vaishyas, they consider Nadi Dosha to be as crucial as the
Mangal dosha. Is The astrologer advises them to cancel such marriages where the kundalis of
the girl and the boy happen to show the presence of Nadi dosha
This is given so much importance as it has after-effects over the successors of the family. Either
the next generation will be weaker or there might be chances of having no successors at all.

Nadi Dosha and its effects:

– The upcoming generation will be abnormal or healthy or there might be even
chances of childlessness.
– Such relationships where there is a presence of Nadi dosha do not last long.
– Problems in the marriage life especially health-related, for both the partners, keep
arising due to this dosha.
– There will be many serious problems such as bad accidents and many kinds of
sufferings.

Nadi Dosha and its remedies:

To lessen the effects of Nadi Dosha both the girl and the boy have to do the required worships.
One of the most useful remedies is the chanting of Maha Mrityunjaya Mantra for one and a half
million times.
Five to seven Brahmins and worshippers should sit together in the temple of worship house of
lord Shiva on the first day of the Puja. After the puja is completed, the chief pandit is
considered to be one of the lords Shiva’s assistants.
The other remedies to decrease the effect of Nadi Dosha include donating valuable offerings
such as gold to a Brahmin.
Food, clothes, a piece of gold shaped as a snake, and following the proper rituals to chant the
Maha Mrityunjaya Mantra is also one of the effective ways to remove Nadi dosha, according to
the Piyush section.