An Overlook at the 4 Major Doshas in Kundali Matching 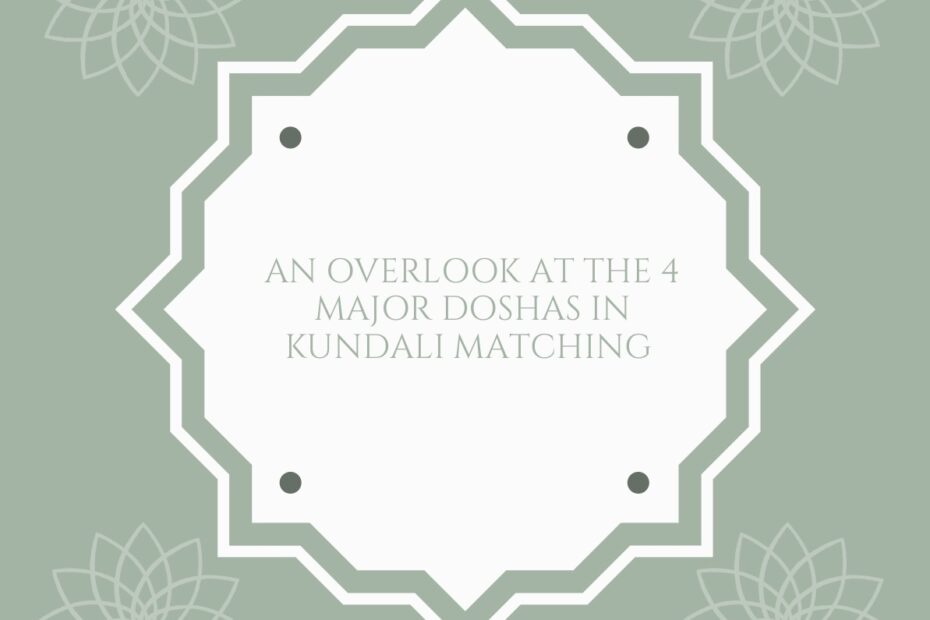 The art of Kundali Matching has been a cultural ritual amongst the Hindu community right from
the ancient ages. It is an important ceremony that is conducted before the individuals are tied in
wedlock. The ceremony is considered to be sacred and even followed in modern times. In
kundali matching, Janam Kundli of the two partners is studied by an expert and experienced
astrologer to check if the match is compatible. This is done by studying the planetary positions
and structure of the stars, constellations, and other celestial bodies, during the date and time of
birth. Many times, the names of the couple are also taken into consideration.
Certain planetary positions which occur during the birth of an individual, cause the Kundli to
form a ‘dosha’. Doshas can harm the life of the native by bringing him certain obstacles.

There are four major doshas which when formed can bring serious mishaps and topsy turvy paths
in life. It is important to check for the presence of these doshas and take the help of an astrologer
to implement effective remedies to cancel out these doshas.
These doshas are:
1. Manglik Dosha: One of the most common doshas is the Manglik dosha. The formation of this
dosha has to do with the affliction of the planet Mars, in the person’s birth chart. Manglik Dosha
is known to ruin marital bliss and cause innumerable problems in the marriage. It may cause
constant conflicts between the couple, trouble in conceiving, health problems, and financial
troubles. In some cases, the marrying of the Manglik to a non-manglik may also cause the death
of the non-manglik. This dosha has been proven to cause problems from time innumerable and
must be checked before the marriage of the individual. There are effective remedies that can
cancel out the effects of the dosha.

is said to be afflicted with the Pitra or Pitru Dosha in their Janam Kundali. The Pitru Dosha is
due to no fault of the individual. It is generally the karma that is inflicted upon them due to the
mistakes, crimes, and faults made by the natives’ ancestors. It is kind of unfair but when
something is already happening, you cannot do much but to deal with it. When the Sun and the
moon come together in the aspect of Rahu and Ketu, the Pitra Dosha is said to be formed. Thus,
if one seems to be going through endless troubles and obstacles in life, it is better to consult an
astrologer and check for this dosha. If the Dosha is considered to be present, effective remedies
must be immediately applied.