ALL ABOUT CHANDRA DOSHA AND ITS REMEDIES 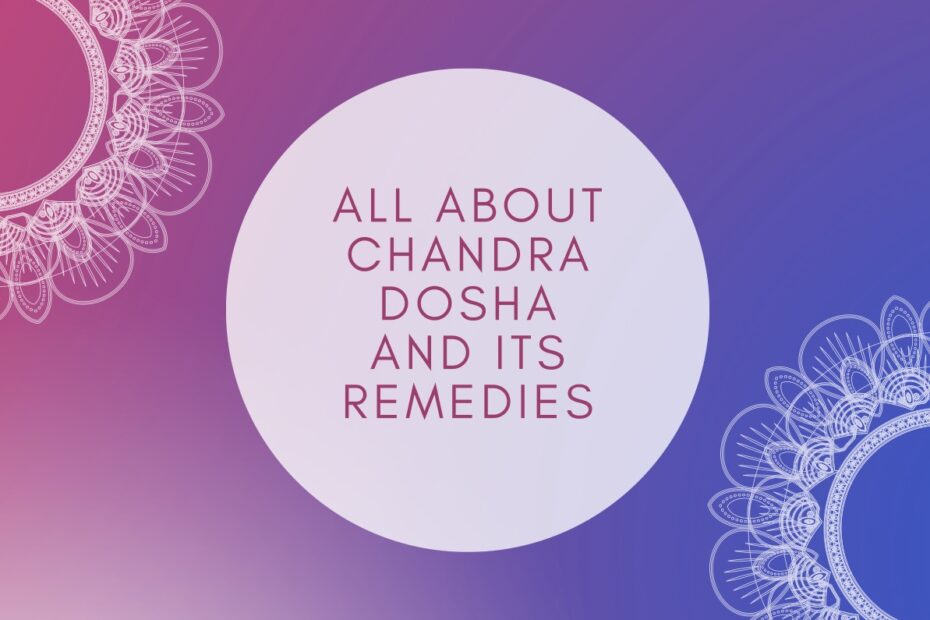 Moon is a very important entity in astrological science especially while charting the Janam
Kundali. N Sanskrit the moon is also known as Soma or Chandra.
The meaning of this name is the denotation of an intoxicating secret drink which is widely
prominent in the ancient scriptures.
Chandra means shine and brightness which is the meaning derived in the Sanskrit language.
Though the moon is a satellite of the earth in astrology just like the sun it is also considered to
be a planet.
Moon denotes the feelings and thoughts in your life and tends to connect with you on an
emotional level. All your basic habits, reactions due to your subconscious self, deepest personal
needs, and many other such aspects are indicated by the moon.

Astrological importance of the Moon:

The moon is of utmost importance in Hindu culture and traditions. It helps in determining many
aspects and things based on the placement of the moon in your horoscope.
Moon is considered to be the ruler of the water element zodiac signs namely- Pisces, cancer,
and Scorpio. Even though the sun is considered to be a very powerful entity since the moon
deals with emotional tendencies it is considered to have more capacity than the sun.
Moon is apprehended to be a symbol of colossal truth and purity as well as the declaration of
divinity and wisdom. Along with these traits, it also indicates The definite expression of beauty,
charm, dream, and fantasy.
Each astronomical entity indicates some color and gemstone accompaniment. Moon is
accompanied by the color white and gemstone pearl.

Chandra Mahadasha and its effects:

If the ruling Nakshatra in your kundali happens to be the moon then this results in the presence
of the Chandra mahadasha. As mentioned earlier represents maternal feelings in nature and
also highlights aspects of the same such as emotions, fertility, nourishment, public life, and
many other factors.
If you tend to inculcate such attributes then it is natural that you would be emotional, intuitive
in mature, and show immense concern towards your loved ones.
Due to Chandra mahadasha, you tend to become sensible, sensitive, possess qualities like being
receptive and affluent, having a good memory, and indulging in praiseworthy deeds.
There are two kinds of effects due to the Chandra mahadasha, one being the strong effect of
bone and the other being the weak.

If the moon in the Chandra mahadasha is strong then you will possess qualities that are inclined
towards the creative side such as imaginative and artistic as well as being knowledgeable and
fearless.
And if the moon is weak in the Chandra mahadasha then you might face problems related to
kidney, menstruation, prone to mental weakness, and you might also feel very lethargic.

Chandra dosha and its effects:

If the moon is ill-placed or debilitated or in retrograde position in your horoscope particularly
during the time of Chandra mahadasha then this results in the presence of Chandra dosha.
The negative effects of this dosha can be seen in relationships of your life as well as the other
bonds with people.
This dosha might make you face problems related to depression, mental stress, or other kinds
of physical pains as well as diseases.
Since the moon is known to be the planet that has a stronghold over your emotional wellbeing
you might face issues related to fluctuation in emotions, constantly being on the edge, and
poor mental health to deal with anybody.

The most important and easy way to reduce the effect of Chandra Dosha in your life is praying
constantly with lots of devotion to the moon. This can be an effective remedy as it is the bad
positioning of the Moon that is resulting in a negative impact on your life.
Donating items such as camphor, rice, cloth especially white in color, grains, silver, white
sandal, sugar, flowers, pearls, curds, bullocks, and many other things can help in lessening the
the negative effect of this dosha.
Along with this, another remedy that can be practiced while praying to the moon is the
chanting of the Chandra Graha Mantra. It should be chanted appropriately and without fail to
see visible differences.