WHY DOES THE BHAKOOT KOOTA IN KUNDALI MATCHING CONSIDERED TO BE ONE OF THE MOST IMPORTANT KOOTAS? 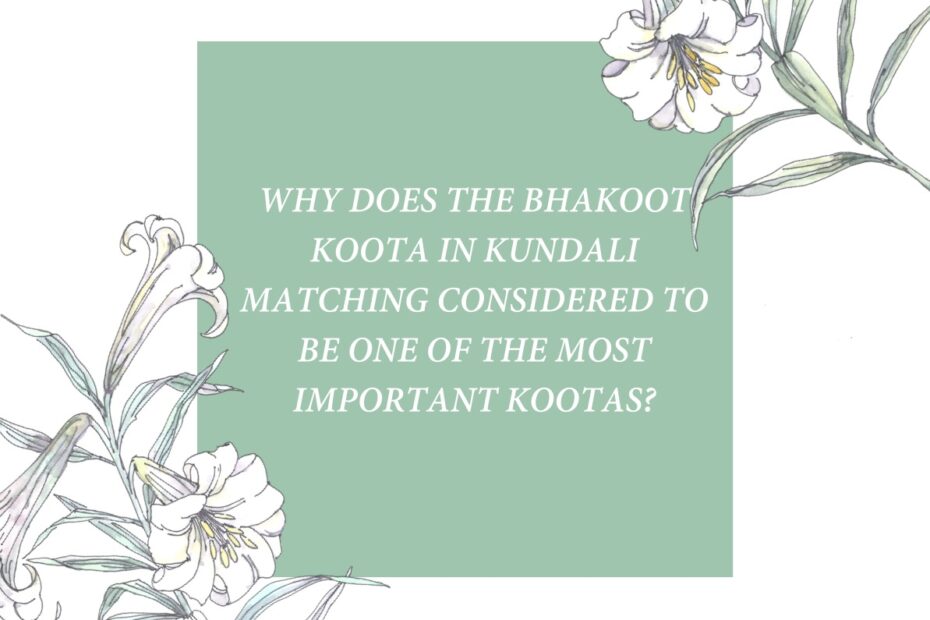 The health of the couple is often something we overlook while we test the
compatibility between the individuals. Many of us tend to believe that we will be
the healthiest throughout our lives and often think that something bad would not
happen to us. In short, we do not even anticipate it. Health plays a vital role in our
lives, and most of us do not even spare a second thought to our health and how we
need to pay attention to it more than ever now. Sometimes, during the course of a
couple’s marriage, often the individual faces the early death of his/her partner, the
partner being a healthy, young individual, and that leaves us surprised and
wondering what must have happened. Kundali matching predicts all of this and
what measures can be taken in order to prevent this and what can be done to reduce
the impact of a dosha.

What role does bhakoot koota have in this?

Kundali matching has eight kootas, and each of these kootas represent an aspect of
the couple’s life. One of these kootas is the bhakoot koota, which represents the
health of the couple and the wealth the couple may gain or lose. Bhakoot koota is
also known as the Rasi Gana and is the test before the final test of compatibility. It
is also considered to be one of the most important tests as it contains seven gunas
and plays an important role in the Ashthakoota Milan process. While getting
married, it is believed that if the couple scores a good and auspicious Bhakoot
score, then the couple will live a happy and healthy married life. It means that the
couple will be able to avoid financial obstacles, infertility issues, and health
problems in general.
How is the bhakoot score calculated?
The bhakoot score is calculated on the basis of the twelve Sun signs which are
karka, mesha, Simha, mithuna, vrishabha, tula, meena, dhanu, makar, Kanya,
kumbha and vrischika. The couple is awarded seven gunas if the Lord of the
partners belong to the same sun sign. The suitable and auspicious match is said to
be when the partners belong to the same sign or even different signs but should
have the same ruling planet. When the couple is awarded with a zero in this koota,
the bhakoot dosha is formed.
What is bhakoot dosha?

When the couple is awarded zero gunas out of the seven gunas, it is known to be
bhakoot dosha. There are three types of bhakoot dosha, which are:

Dwirdwadash Bhakoot Dosha– this causes a lot of financial problems in the
life of the couple.

Shadashtaka Bhakoot Dosha– this a lot of health problems which could even
result in the early death of one of the partners.

Nav Pancham Bhakoot – this causes a lot of infertility problems among the
couple, and could even result in problems with pregnancy.

As you can see, bhakoot dosha is considered extremely bad and bhakoot koota
plays an important role in the couple’s life. The dosha can cause a lot of problems
which eventually would lead to the separation of the couple and it would further
escalate to a divorce between the individuals. This is one of the reasons why
kundali matching is necessary and should be done before the couple gets married
because the health of the couple is extremely important. Not only that, kundali
matching can also provide remedies and solutions to the obstacles that will appear
in the life of the couple. Apart of this, the Astrologer can provide solutions and
poojas that can be done and followed in order to reduce the impact of the bhakoot
dosh or even remove it completely.