Marriages in India – a look into Kundali matching, the prerequisite of marriage. 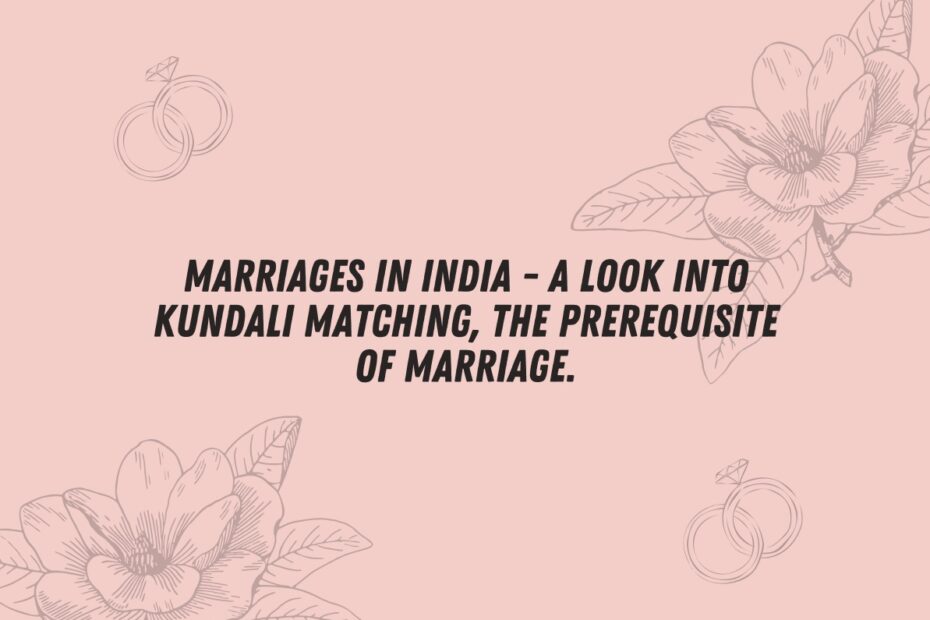 Marriage holds a special place in Hinduism. It is the sacred tie between the bride and the
groom which transcends lifetimes. A match made in one lifetime is believed to be carried
over to the coming lifetimes. It is the holy matrimony of the couple and by extension binds
the families too. So it stands to reason that the compatibility must be checked before
finalizing the marriage. And this is done by Kundali matching. The Kundalis of the bride and
groom are quite literally matched to determine the longevity and prosperity of the marriage
along with the path the marriage will take.

The meaning and use of Kundali according to Vedic Astrology.

Hinduism places great emphasis on the belief that everything in the Universe is connected.
As such, there are things out of the control of the couple which can determine the course of
their marriage. It is this course that Kundali matching aims to predict. But what is a Kundali?
Kundali is the birth chart of a person made at the time of birth. In simple terms, it is a map
showing the positions of the astrological bodies – the Sun, the Moon, and the planets, at the
time of birth. This is then used for all future references including Kundali matching at the time
of marriage. The Kundali is also responsible for assigning a zodiac sign.

Gunas – a summary of different aspects of married life.

Gunas are the qualities in one’s birth chart. It is these Gunas that are compared during the
Kundali matching. There is a total of 8 Gunas and each one is split into different categories.
A person belongs to one of the categories for each Guna. During the Kundali matching
process, the compatibility based on each Guna is checked. Each Guna dictates a different
aspect of the relationship and hence has a separate score assigned to it. For every match,
the score corresponding to the Guna is added to the final score. Out of a maximum score of
36, the couple must score at least 18 for the marriage to be considered feasible. The higher
the score, the better the match. A score between 18 to 24 is considered a good score and
marriage is recommended. A score between 24 and 32 predicts a successful and
prosperous marriage. A score between 32 and 36 is considered an excellent score and the
marriage is deemed to be a perfect match.

What is the dreaded Manglik Dosh people keep rambling about?

The process of Kundali matching also makes sure that the levels of Dosh in the bride and
the groom are similar. Dosh is related to the influence of Mars and as such, people born
under the influence of it are believed to have Manglik Dosh, or simply Dosh. It is mainly
associated with having negative effects on the person. So any alliance between a Manglik
and a non-Manglik person is believed to be doomed from the start. The effects of the Dosh
can manifest themselves in many forms in the marriage with the worst being the death of the
spouse. However, for a couple having similar levels to Dosh, the negative effects are
believed to cancel each other out. Thus it is beneficial to marry people with the same levels
of Dosh. In case the match is to be made between a Manglik and a non-Manglik person, the
Dosh must be removed. There are innumerable ways to get rid of the Dosh with the most
common being a mock marriage, before the actual one, between the person with the Dosh and a tree, an animal, or an inanimate object. This transfers the negative effects on to the
mock spouse.

The Navamsa chart and its importance in Kundali matching.

The last factor to be considered during Kundali Matching is the Strength of the Navamsa
chart. Where the Kundali indicates the presence of astrological bodies, the Navamsa chart
describes the strength of influence of those bodies. The word Navamsa comes from “Nav”
meaning nine and “Amsa” meaning divisions, so together it means nine divisions. In
Astrology, different planets have different influences. To avoid contradictory influence of the
planets, Kundali matching has to take into account the strength of the Navamsa chart of the
bride and the groom.