Warning: Use of undefined constant HTTP_USER_AGENT - assumed 'HTTP_USER_AGENT' (this will throw an Error in a future version of PHP) in /home/u889455019/domains/kundlimatching.in/public_html/wp-content/themes/neve/header.php on line 1
 Understanding the Varna Koota in Kundli matching. - Kundli Matching 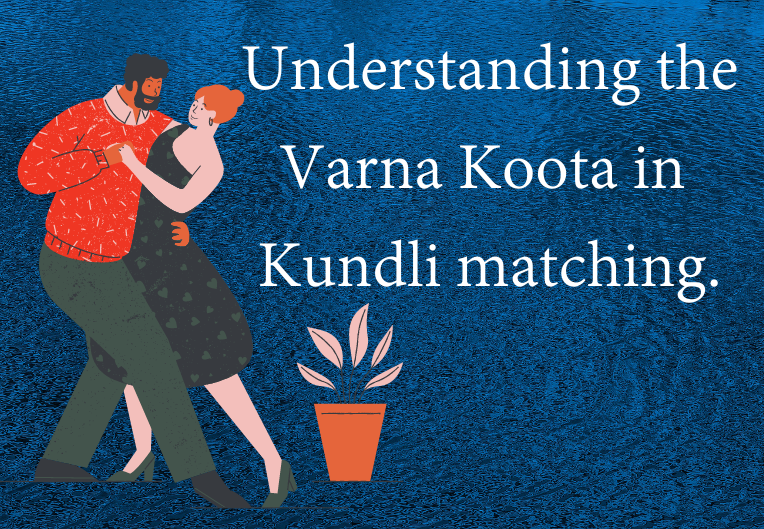 Kundli matching is counted as a very essential ritual for any marriage. The origin of this process goes long back in our Indian history. From several generations, all the Hindu marriages have been benefitting from this method. It is given the importance because of its effectiveness at predicting the quality of a marriage.

Be it love marriages or arranged, Kundli matching has proven itself to be very efficient and essential. All around, we are surrounded by couples who would attribute the success of the match to that of the process of Kundli matching.

Contrary to popular belief, there are various other methods available when it comes to the matching of Kundli. For instance, there is Duodashkoota method or Dashkoota method that follows a very similar pattern as Ashtakoota method.

This method comprises of eight aspects or ‘Ashta’ Kootas. All these eight aspects contain varying score weight-age based on its relevance and importance for a marriage. These scores are often termed as ‘Gunn’ and hence this process also came to be known as ‘Gunn Milan method.’

There are a total of 36 Gunns that are divided into these eight aspects varyingly. It is mentioned that for any couple to benefit from the marriage and live a happy life, they need to at least score a minimum of 18 scores. Any couple who attain a score below this are advised to rethink the marriage or at the very consult an astrologer for the most effective remedies.

1) Varna – Compatibility of the status and social background.

2) Vashya – Compatibility and connection of emotions.

3) Tara – Represents luck that the couple would experience.

4) Maitri – Represents the bond between the two individuals, based on their zodiac signs.

5) Gana – Focuses on the compatibility between the temper of the two individuals.

6) Yoni – Represents the animal instincts of the individuals, that is, the sexual desires and level of aggression that could be there.

7) Rashi – Focuses on the intimacy and connection of the soul.

8) Nadi – Represents the health and genes of the individuals. This is the Koota that helps predict the possibility of an offspring.

Based on the beliefs of Vedic astrology, every one of us is born under a ‘Varna.’ This Varna is also referred to as status. This section is divided into four parts, according to Dharma-Shastras.

These four divisions are different levels of status in our Hindu culture. They are Brahmins, Kshatriyas, Vaishya and Shudras. Brahmins are supposedly counted as the highest level, while the next three come in its success in the same order as mentioned.

The belief is that for a marriage to be successful, the Varna of the bride should be equal or lower than that of the groom.

Understanding the reason behind Varna compatibility.

After marriage, the life of the individuals merges and becomes one. Both of them experience and live a life that is constantly similar and together. Thus it becomes important for the couple to match in status so that there are not very big adjustment issues. Moreover, the belief that the bride’s Varna should be lower than the groom or equal stems from the fact that the bride moves into the groom’s house. If, say, the groom was of lower status, the bride would struggle in adjusting and compromising. But if the groom comes from higher varna, the bride is going to experience a lot more luxury and comfort than she is used to in her pre-marital life.