THE MOST DANGEROUS DOSHAS 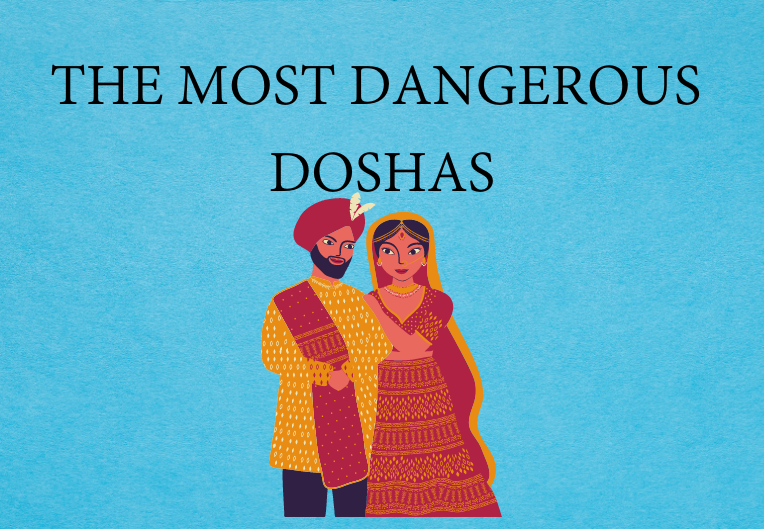 Guru Chandal Dosha occurs when the planet Guru and the malefic planets like the north and south lunar nodes, Rahu and Ketu respectively, are conjoined with each other.

For an individual to have a strong hold over knowledge, kids, education and wealth, the effect of the planet Guru must be very powerful in the natal chart.

Mangal is the Sanskrit name for the planet Mars. This Dosha occurs when the presence of the planet Mars is in the Ascendant or the first house, fourth house, seventh house, eighth house and twelfth house.

The presence of Mangal Dosha can lead to problems like disputes between a married couple, deterioration in health of either of the partners, infidelity, decline in mutual harmony, etc.

This Dosha consists one of the most nefarious planetary alignments.  This Dosha occurs when all the planets in an individual’s natal chart remain in the shadow of the lunar nodes Rahu and Ketu.

This Dosha fills the life with sufferings and struggles which makes the life slow and troubled. There are problems introduced in life such as unwanted sorrows, health issues, familial disputes and debts.

Pitru Dosha is the Dosha which occurs due to not properly treating the Pitrus during the time of Shradh. Shradh is the time when ancestors are worshipped so that they protect and bless their family and keep them safe from any kind of troubles or problems.

If this is missed then there is an occurrence of this Dosha. This Dosha can cause problems like failure in profession, career, honor, deficiency in money despite earning, too many enemies causing issues involving legal cases, debt ridden, etc.

While reading the Janam Kundalis of the girl and the boy, and it so happens that both their Nadi become the same in the birth chart then it may represent the presence of Nadi Dosha.

Nadi is one of the most important Kootas in the process of Guna Milan, thus the presence of this Dosha can get the whole marriage denied.

This is a pretty important Dosha and is visible in an individual’s Kundali when the Moon leaves vacant places. Second house and twelfth house of the Kundali is left free once this Dosha occurs.

The person with this Dosha will tend to have less wealth and money in his/her life. He/she might also suffer from lack of mental peace.

The people with this Dosha in their life tend to have a lot of struggle in their life. They might earn a lot of money but are clueless how their money is spent.

These people are normally very frustrated in their lives. When the Moon in one’s Kundali is not powerful, this Dosha is likely to take place.

This dosh is likely or embarrass an individual. This particular dosh will be seen in an individual’s’ Kundali due the wrong placement of planet Saturn.

With this Dosha in an individual’s life, all his/her work will get delayed and he/she will face some problems on the career and business front.

This is a Dosha that almost everyone is afraid of. It takes place due to the wrong position of the planet Shani. This Dosha will end up punishing an individual for all of his/her wrong doings.

This Dosha can also make an individual extremely poor and might also pose a lot of problems in the life of an individual.

This particular Dosha ends up making the life of an individual very slow and full of struggles. This Dosha will be present in someone’s Kundali due to the wrong placement of the planet Mercury.

The kids born with this nakshatra in their life end up making their parent’s life full of worries and problems. They also tend to spend a lot of money, draining their family wealth.

This Dosha is a very powerful one and can be very harmful for the person having it in his/her Kundali. Married couple with Grahan Dosha will have problems in having a baby.

Miscarriages will be common and an individual will suffer through some diseases and have depression in his/her life.