THE EFFECT OF DOSHAS IN MARRIAGE DURING KUNDALI MATCHING 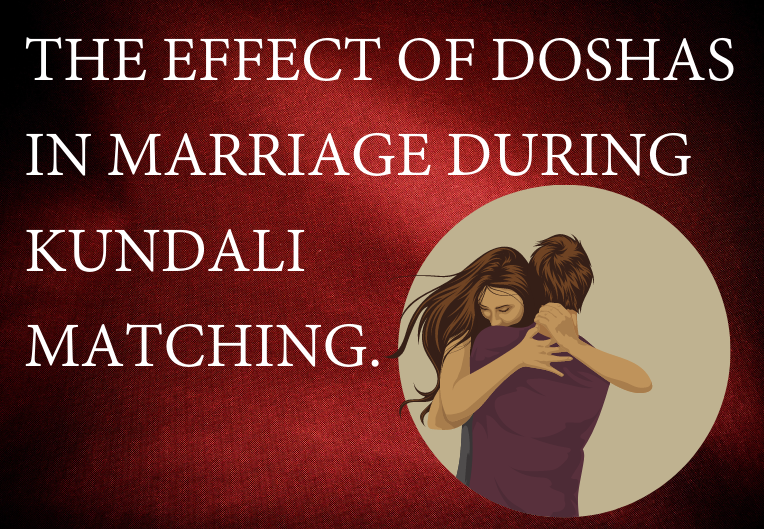 The process of kundali matching involves the detailed matching of around 36 different types of Gunas. These gunas are studied while reading the kundalis of both the bride and the groom.

For a marriage to be fit and the match to be good, at least 18 out of these 36 gunas must match. The astrologer will sanction marriage between the two people only when this particular condition is fulfilled.

With the help of kundali matching, it can be said that the bride and groom are likely to have a good married life and chances are that they might face few hurdles in their future together.

Doshas in Kundali are certain defects which might arise at the time of kundali matching. These defects can be a bit serious and might pose certain problems in the marriage of the two people.

The three most common and pretty serious kundali doshas are explained below. These doshas should be carefully checked during kundali matching and their remedies should be followed to eliminate them from the life of the bride and groom.

This is one the most common dosha that can be seen during kundali matching. This is also a very serious dosha and is dreaded the most by the families of both the bride and the groom.

This dosha can be seen in the kundali due to the presence of the planet Mars in the first, second, fourth, seventh, eighth or twelfth house of the bride or the groom at the time of kundali matching.

The position of the planet Mars will determine how strong or weak the effect of this dosha will be. The placement of other planets and the nature of interaction of these planets with the planet Mars also decide the strength of Mangal Dosha in a person’s kundali.

Due to this dosha, a person is likely to face some delays in his/her marriage or might even experience death of his/her partner. The married of life such a person will be full of troubles and there will be constant fights between the married couple.

If, during the Kundali matching of the girl and the boy, it is revealed that they happen to come under the same Nadi, then in such cases the dosha present is known to be Nadi dosha.

While considering from the compatibility for marriage point of view, this dosha is not a desirable one. It may cause some serious problems if not taken care properly.

If Nadi dosha is found to be present after the process of Kundali matching of the partners, then the partners might have to lead a troubled life and the married life would not be so fulfilling.

There will be constant bickering among the partners, frequent lash-outs on each other, clashes at home, unbalanced sexual relationship, absence of progeny as well as no proper bonding between the couples.

Another dosha that can harm the aspects related to marriage is the Bhakoota Dosha. After Kundali matching of two people, the presence of Bhakoota dosha can mean an ill-compatibility among the partners.

This dosha can cause worrisome problems, which might bring many problems and issues, and the kind that are very serious and never-ending.

With the help of Kundali matching it can be seen that, due to the presence of Bhakoota dosha, the partners might be infertile which minimizes the chance of them being able to have offspring’s.

As mentioned earlier this dosha can stay in a person’s life for a long time and make matters bad for the couple. Along with causing problems related to childbirth, Kundali matching also reveals that this dosha can cause problems in finance, collective happiness and the life span of the couple.

The knowledge of Kundali dosha, which can be found out with the help of Kundali matching is of utmost importance. It can help in solving problems related to marriage.If it happens so that, after Kundali matching, there happens to be no remedy or precautionary measure then such marriages are avoided so that the partners do not suffer in the long run.