What are the effects of Mangal Dosha in marriages? 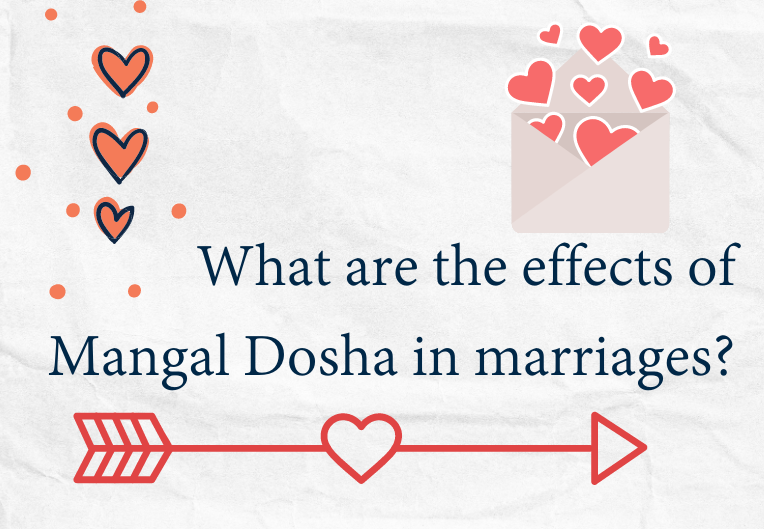 Marriages are an important part of everyone’s life. It marks the union of two different souls for the entire life. It is an auspicious event. A good marriage is influenced by a lot of things. For a good marriage, lots of efforts are required because your life gets connected to someone’s life.

Vedic astrology has always given a lot of importance to the positions and movements of planets and other heavenly bodies. It always believed that the positions of these bodies are able to influence our lives. There are innumerable effects of the celestial bodies. Sometimes, the influences can be positive while sometimes it can be negative.

These influences not only affects their lives but can also affect the marriages as well. The unfavourable positions of different planets can create different defects in the Kundali, which in astrology is termed as Doshas or Kundalidosha.

One such dosha is Mangal dosha, which is created due to the unfavourable positions of the planet Mars. It can have some serious consequences in one’s life.

What is Mangal Dosha?

As mentioned earlier, Mangal dosha is a defect created in the Kundali of an individual due to the unfavourable position of the planet Mars. According to the Vedic astrology, if the Mars is present in the 1st, 2nd , 4th, 7th , 8th and 12th houses of the horoscope then the position is considered to be unfavorable.

Now, sometimes the planet doesn’t influence someone’s life completely, but there is a partial influence of it in our lives. The effects in the partial case will not be as severe as in the complete influence of the Mars.

But Mars is not a negative planet. Only the unfavourable positions creates issues in the lives of people. But if the planet is placed in a favourable position, then it can bless the person with strength, power, intelligence and confidence.

Now lets us see what are the effects of the Mangal dosha in the life of people.

Effects of the Mangal dosha in marriages

Mangal Dosha is a very feared dosha especially in marriages. People are scared to let their children marry someone who has Mangal Dosha in its Kundali because of the severe effects it has in the lives of people.

Following are the different effects of Mangal Dosha :-