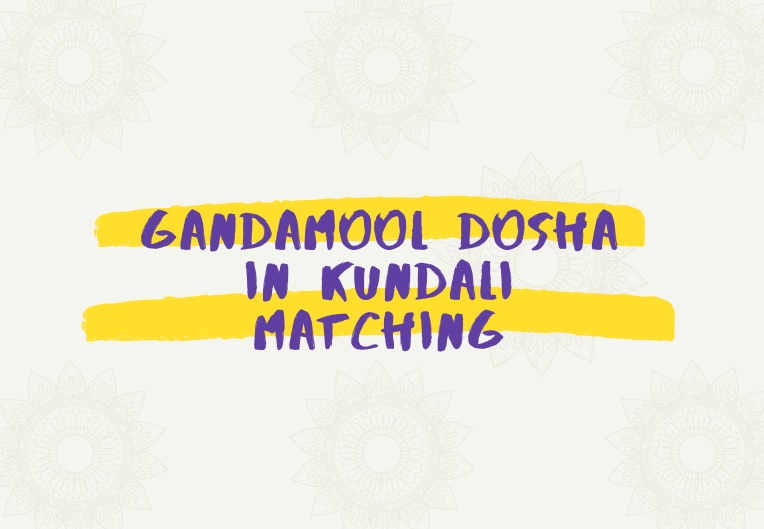 Gandamool Dosha is one of the Doshas where people have suffered a lot through their lives.
This Dosha occurs in an individual’s existence due to the misalignment of the planets,
particularly the malefic ones, in the birth map.
The planets that make this Dosha possible are Mercury and the south lunar node of Ketu.
Gandamool Dosha will occur if t these are the major Nakshatras born that the native is born
with. If a person is born under the unique six nakshatras, then Gandamool Dosha is bound to be
present.

Meaning of the Moon in Indian Astrology:

The location of the moon is of extreme significance when planning the birth chart or the
natal chart or Janam Kundali. Any people would believe that the Sun should be considered of
the utmost value since it is the nucleus of our solar system.
The Sun is also a very significant feature, but because the Moon is closest to the Earth, its
effects are much greater on the Earth and the living beings within it. Well, this argument can be
proved by tides of high and low patterns due to the various phases of the Moon.
Moon is used as the basis for any projection or inference in Vedic astrology. There are 27
Nakshatras in all of them, and some Rashis as well. The Moon keeps passing over the
Nakshatras and Rashis.
The placement of the Moon in relation to these Nakshatras and Rashis is considered at the time
of birth. A Janam Kundali is prepared with the aid of this. The Nakshatra with which the Moon is
closely associated at the time of birth is known as the Birth Star or Janam Nakshatra of the
individual.

As mentioned earlier, there are 27 Nakshatras in all of Vedic astrology. Each of these
Nakshatras has a very important significance. Of the 27 Nakshatras, six are considered to be
Gandamool Nakshatras.
These six Nakshatras are Ashwini, Ashlesha, Magha, Jyeshtha, Moola, and Revathi. Gandamool
Dosha could have a person born with either of these Nakshatras to be their birth star. This
Dosha may have a lot of troubling issues with it.
Moola: People born with this star in their Kundali are expected to have a lot of trouble in their
parents’ lives. These children might also end up investing a lot of money and hence appear to
neglect the resources of their parents.

Revathi: The first three phases of this particular Dosha do not create a lot of problems for
people who have this Dosha in their Kundali. These people seem to live a happy, successful life.
However, the fourth step can be troubling, because people in this step will have issues with
their parents and may not have a very smooth life of their own.

This is seen in the individual’s Kundali at the point when two separate nakshatras merge.
According to the astrologers, this is a very dangerous Dosha.
Gandamool Dosha is extremely dangerous when two nakshatras, one being an individual’s birth
star and two Rashis join, or one being an individual’s zodiac sign.
This Dosha, though, is a very unusual one and is seen in the Kundalis of some very unique
individuals. The intersection of two separate nakshatras is seen either at the beginning or at the
end of the nakshatra.
On the brighter side, the people with Gandamool Dosha in their Kundali seem to be beautiful
and have a natural charm. These people will be very pleasant, and they will all be happy.
They’re going to try really hard to reach their goals.

The parents of a child, born with this Dosha in Kundali should suggest holding a shanti pooja on
the 27th day of their child’s birth. This pooja can be done at any point of life, and even when
the Moon eventually comes to the appropriate Nakshatra.
Chanting Maha Mritunjaya pooja by the person who has this Dosha in his / her life can also
help. One should also consider worshipping Lord Ganesh and donating green vegetables every
Wednesday.
Donation of emeralds, bronze utensils, amla and coriander would appease the Buddha who, in
exchange, may help to cure the Gandamool Dosha. Praying to the planet Mercury also serves as
a treatment for this Dosha.