Revealing the Role of the Sun in Kundali Milan and Astrology 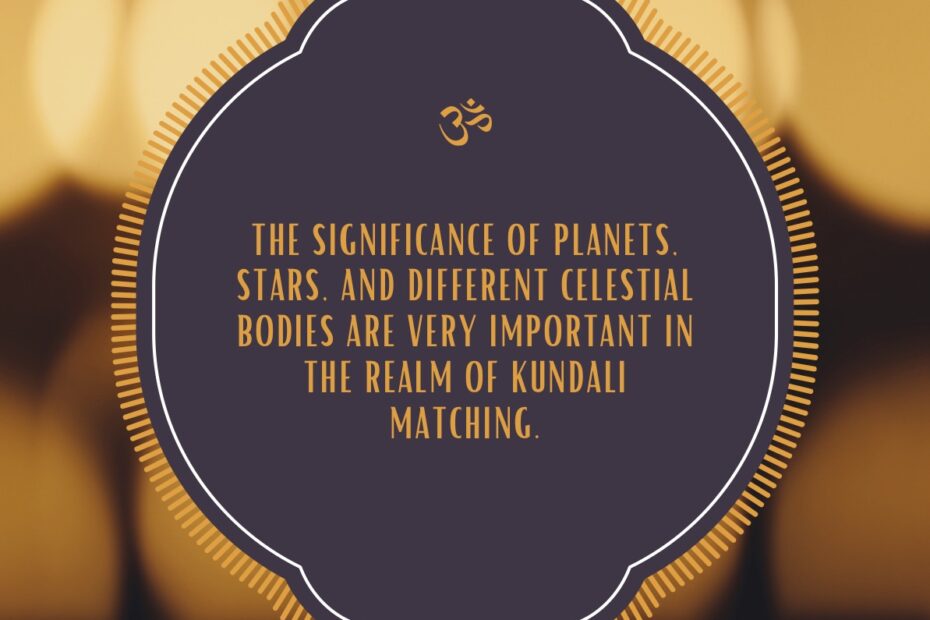 Why are the Positions of Planets Important in Kundali Matching?

Marriage in India is considered to be a sacred ritual, especially in the Hindu community. With all
splendor, luxury, and grace, the wedding ceremony of two individuals takes place to mark a new
beginning of their life. One grows up planning their wedding to be the perfect occasion with
happiness and joy bouncing in the air. However, no matter what, the most important element of a
perfect wedding and a blissful marriage lies in the choice of your partner. Most marriages in
India follow the concept of arranged marriage where often the couple meets each other at the
mandap for the first time. However, the success rate of such marriages has generally been pretty
high. Why so? Because in the Hindu community, an important ceremony called Kundali
Matching is conducted before two individuals are tied in wedlock. In Kundali Matching, the
Janam Kundalis of two individuals is studied by an astrologer to see if the match is compatible in
terms of outlook, health, finance, personality, progeny, and many other sectors. This Janam
Kundali is formed by the details of the individual’s birth, time, and date. By these details, the
astrologer studies the position of planets, stars, and constellations after which he successfully
predicts the individual’s future. Thus, the significance of planets, stars, and different celestial
bodies are very important in the realm of kundali matching. The positions of planets signify the
formation of many different doshas and yogas in the individual’s life which positively and
negatively impact the native’s life. There are seven major planets which are significant in
Kundali Matching. They are the Sun, the Moon, Mars, Mercury, Venus, Jupiter, and Saturn.
These planets have a variety of influences on the native’s life based on favorable placement and
ill-placement in the native’s birth chart. This article goes on to describe the role of the Sun in
astrology.

Role of the Sun in Astrology and Kundali Milan/Matching

The sun is the biggest star situated at the center of the solar system, It is a hot mass of fire. It is
the most important form of energy that sustains life on planet Earth. The sun is the reason for the
occurrence of many different phenomena that takes place. All the planets of the solar system
revolve around the sun due to its high gravitational force. In Indian Astrology, the sun is
considered the Almighty and the Lord. The Sun is referred to as ‘Prana’ or life and plays a
crucial role in sustaining life.
Planets revolve around the sun in different and separate orbits. The growth of green or plants and
trees is possible only due to the Sun. Sun is the most powerful and influential planet in the solar
system. The energy it radiates is the reason for all the forces on planet Earth. The Sun is also the
only source of light and it is the light of the sun which is reflected by other planets. The rays of
the sun are connected with the innermost spirit present in Human Beings. The Sun can be
considered as the Soul, the Almighty, and the force of life in the universe. In Vedic Astrology,
the Sun is considered to be the soul of an individual.
The presence of the Sun in one’s birth chart blesses the native with fame and power in most
fields of his life be it a career, relationships, family, health, or progeny. It can also bring the
person to create a lot of political influence on others. Metaphorically, just as the presence of the
Sun brings light to the day and its absence brings darkness, a human’s birth chart with a strong
influence of the Sun is blessed with a lot of happiness and success whereas a chart with a negative influence of the Sun can bring numerous conflicts, struggles, and obstacles. If the Sun is
placed in a position which may result in a negative influence, the native can become short-
tempered, aggressive, and suffer from numerous mental and emotional disorders. They are also
known to be life long pessimists who are always cheated on. The various Yogas formed by the
Sun are the Veshi Yoga, Vassi Yoga, and the Ubhayachari Yoga. These Yogas have both
auspicious and inauspicious effects attached to it.