Debunking the Myths Regarding the Manglik Dosha 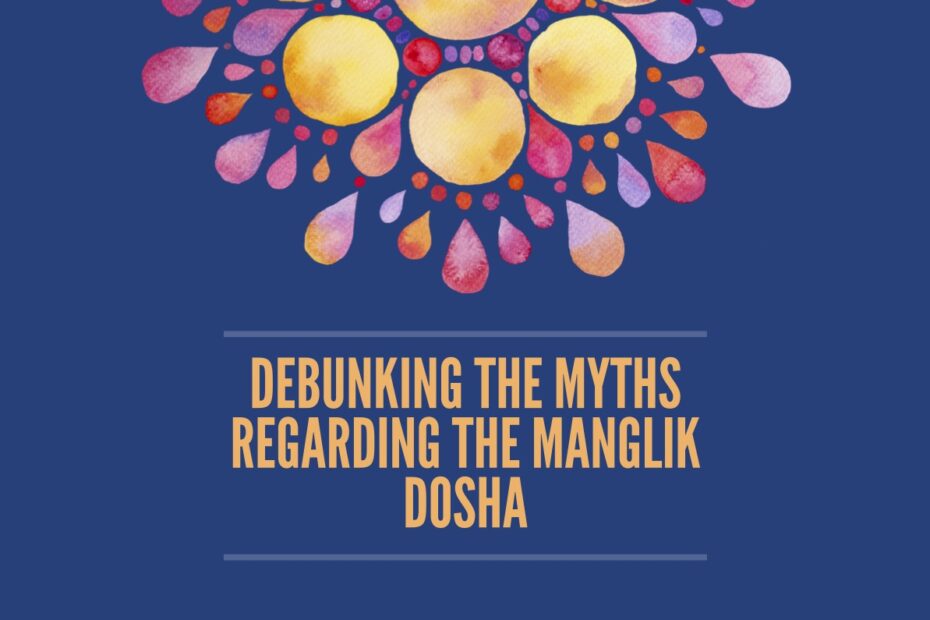 In India, since ancient times, when a child was born, the details regarding his birth were noted
down by the child’s guardian. These details were the date, time, place, and name of birth. The
details were then sent to an expert astrologer, usually, the one who was the family astrologer, and
the child’s Janam Kundali was made. The Janam Kundali is made by studying the various
positions of constellations, stars, and different celestial bodies. This Janam Kundali has certain
predictions about the child’s life and thus is used to prevent the child from any mishap that has
been chalked out in their kundali. The positions of planets are important in deciding the fate of
an individual as it has the power to form certain doshas and yogas and thus impact the native’s
life both positively and negatively. This Janam Kundali is again used during the marriage of the
child. Marriage is considered to be a sacred ritual in India and thus celebrated in the most lavish
and luxurious ways. However, the main component of a successful marriage is the presence of a
suitable partner. Thus, the process of Kundali matching is followed where the Janam Kundalis of
both the bride and the groom are matched to see if compatibility levels are good or bad. This is
where the role of doshas and yogas come in. The Manglik Dosh is one of the most important
dosha’s present in an individual’s chart. It is often feared the most and the one occupying such a
dosha often finds it hard to find a partner who agrees to the marriage. This article will go on to
resolve myths regarding the Manglik Dosh.

What is Manglik Dosha and how is it said to affect the native:

The Manglik Dosha is no doubt the most feared dosha out of all the other doshas. This Manglik
Dosha is formed when Mars occupies the first (house of dominance, fourth (house of mental
serenity), the house of marital life (seventh(, eight (house of life), and the twelfth house (the
house that depicts financial crises and losses).
If Mars is positioned in the first house, a situation of constant fights and conflicts is said to
prevail between the two partners. When Mars occupies the fourth house, it is considered that the
native will frequently change occupation which will resort to a downward movement in their
careers and thus affect them mentally. Again, if Mars occupies the seventh house, it is believed
that one strikes up too many differences with their partner which results in constant anger. If
Mars occupies the eight house, it is considered that the native has a high chance of losing their
inherited property which leads to family and marital drama.
Finally, if Mars positions itself in the twelfth house, the natives can lose a great deal of money
very suddenly, have phases of mental depression and also suffer varyingly in their health.

Debunking the Myths regarding the Manglik Dosha:

– People often have the misconceptions that if a Manglik does not marry another Manglik,
death is chalked out in their path. If this was to be true, the population of the world would
never be so much, and also, that means everyone who dies is married to a different
Manglik partner?
– If the alignment and position of Mars are enough to determine the death of a person, don’t
other planets have the same power? Then any kind of alignment leads to an early death?
Very baseless myth

– People all over the world die every day due to natural causes, accidents, carelessness, and
so many other reasons. Does that mean that each and everyone had the Manglik Dosha in
their charts or that the ones who don’t have any chance of dying?
– There have been predictions that state that if a person has the Manglik Dosha they will
marry late. However, the causes of late marriage can range from career problems, partner
issues, not having the will to marry, financial problems, health problems, and an array of
other issues. Thus, it is a complete myth.
– There has been the recent rise of words like double, quadric, and triple Manglik. All these
have no roots in Indian Astrology and are only curated by inexperienced individuals. It is
advised to not pay any heed to such words.