Revealing the Role of Jupiter in Kundali Matching and Astrology 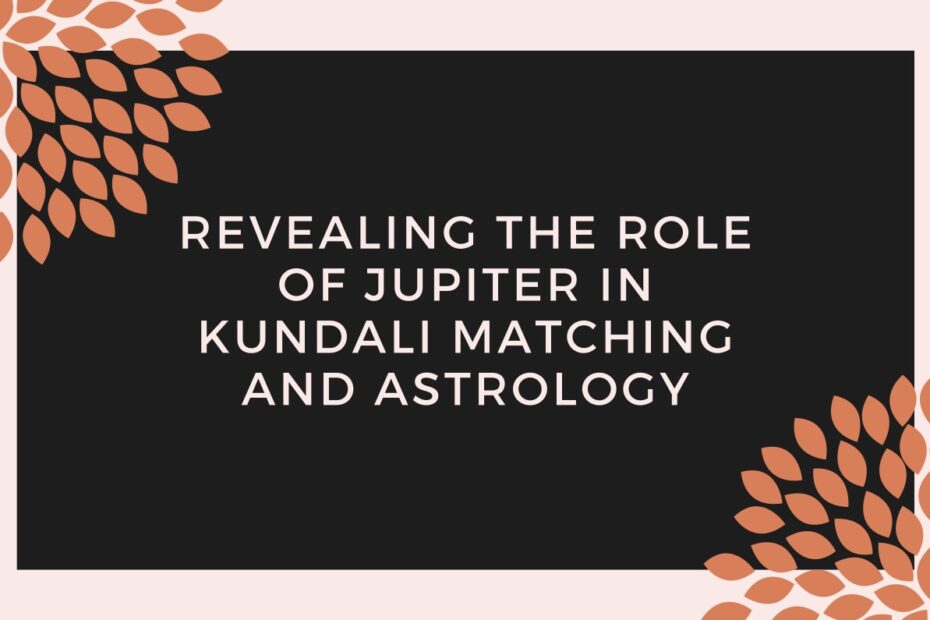 Why is Kundali Matching done?

In India, especially among the Hindus, the marriage of an individual is considered to be one of
the most sacred rituals. Every individual desire to have the perfect wedding with lavish
decorations, delicious food, and the perfect setting. However, the most important part of a
wedding has always been the partner you get married to. The wedding is just a show to mark the
beginning of a new chapter in one’s life. The most important thing needed for leading a happy
and healthy married life has always been the presence of the right partner by your side, with
whom you can walk all paths of life. That is why the concept of kundali marriage is so prominent
in Hindu culture. In kundali matching, both the bride and the groom’s Janam Kundali are studied
carefully to see whether certain factors about themselves are compatible with each other. These
factors include the personality, outlooks, health, wealth, progeny, etc of the individuals. A Janam
Kundali is formed by studying the positions of planets, constellations, stars, and celestial bodies
based on the time, date, and place of birth of the native. This is done as these planets have great
power in creating both a positive and negative impact on the individual’s life. They are
responsible for the formation of different yogas and doshas in the individual’s horoscope. These
doshas and yogas can be both auspicious or inauspicious and harm the native’s life. This concept
is rather fascinating and thus, this article goes on to talk about the role of Jupiter in Kundali
Matching and Astrology.

Role of Jupiter in Kundali Matching and Astrology:

In Kundali Matching and Astrology, there are seven major planets in the solar system that can
create an impact on the native’s life. These seven planets are the Sun, the Moon, Jupiter, Saturn,
Mercury, Venus, and Mars. The other two important planets that are also known as the karmic
planets are Rahu and Ketu. Jupiter is the 5th planet in the solar system. In Vedic astrology,
Jupiter has always been considered to be a highly benefic planet. Jupiter represents wisdom,
knowledge, health, education, and happiness in Vedic astrology and kundali matching. If Jupiter
acquires a strong position in the individual’s horoscope, the native can be blessed with all the
good things in every sector of life. The person with a strong influence of Jupiter on his or her
natal chart will be blessed with good health, successful in most fields, good luck, good financial
prospects, and overall be very fortunate in life. Jupiter is the largest planet in our solar system
and thus termed as the Guru of astrology. The word guru means a wise and honorable person
who is considered to be superior to others. Jupiter is the ruling planet of two zodiacs- Pisces and
Sagittarius. His exaltation can be found in the zodiac of Cancer whereas his position is
debilitated in the zodiac of Capricorn. If considered in terms of occupation, Jupiter makes the
greatest influence on priests and teachers as he is the ‘guru’.
When Jupiter has a negative influence on a person’s horoscope, the native can suffer from many
dangerous things. The native is affected by depression, struggles, numerous obstacles,
pessimism, and exhaustion.
Jupiter takes a year to orbit around the sun and is associated with the color yellow. People with
a strong influence of Jupiter in their charts have the lucky gemstone of yellow sapphire.
Jupiter has such powers of auspiciousness that even if a person has a strong influence of a
the malefic planet on their charts, the presence of Jupiter can remove the negative effects, reduce it or often cancel it, not letting the individual get affected by its harmful effects. If Jupiter is
present in the horoscope of a female born, it signifies that the female’s husband will have a long,
happy, and healthy life alongside both of them having a blissful married life. Again, Jupiter also
has a strong influence on deciding the fate of marital life. When positioned in a favorable
manner, it blesses the couple with marital bliss. However, if Jupiter is found in the debilitated
state or in a position where its effect is reduced, the couple may be harmed by marital struggles.
Thus, the presence of Jupiter in one’s kundali is looked forward to in kundali matching.