The Significance and Role of the Second House in Kundali Matching 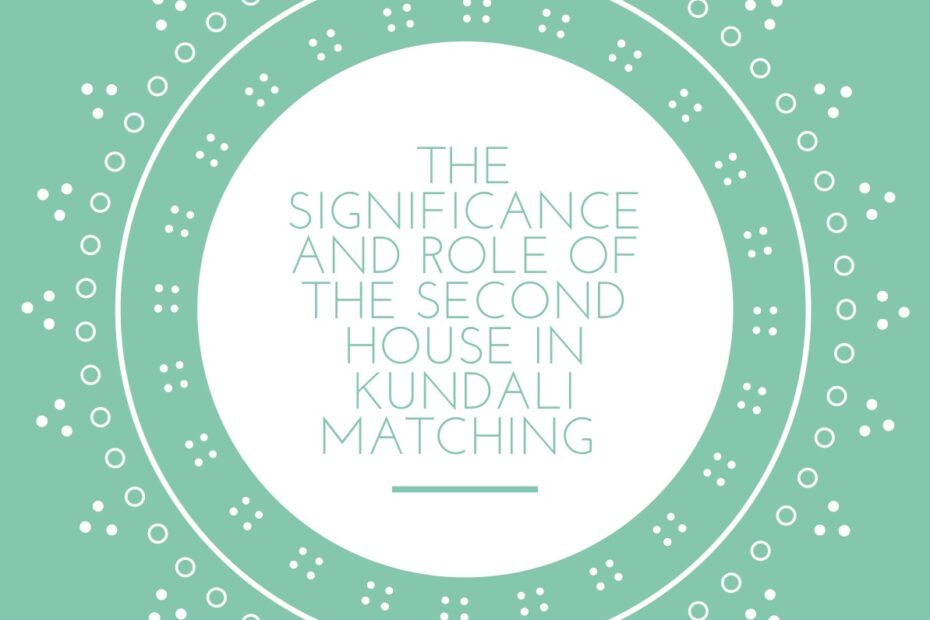 Kundali Matching is a vast and important ritual that is practiced diligently among the Hindu
community of India before marriage is about to take place. Kundali matching is nowhere near the
realm of superstition as it deals with the proper study of planets, stars, constellations, and
specific planets in specific houses. Believe it or not, with each house, the role of planets change
too! That’s a lot of information to process, isn’t it? But, no worries, as this article will tell you all
about the second house and the role it plays in deciphering our lives in kundali matching.

The 2nd House of Kundali

The zodiac or sun sign that the second house is associated with is the Taurus zodiac. The natural
significators of the Second house are Venus and Jupiter. The Moon, Saturn, Venus, and Mercury
perform best in the second house of our kundali or natal charts.

The areas of Life that the Second House rule and govern

Coherently, the second house of our birth charts influences the financial, material goods,
earnings, fortunes, and the realm of precious stones, in our life. Another name the second house
goes by is the House of Money or Dhana Bhava. The second house determines how the native’s
life will play out in the sector of finances and affluence. The house does not only control finance
in the direct or liquid form, i.e, currency, but also in the indirect and solid form through stocks,
valuables, jewelry, inheritance, bonds, and other such areas. Even the ability of a person to
handle their finances, incomes, savings, planning their budgets, and investments in life, is
controlled by the second house to some extent.
As stated earlier, the second house is an important element in the immediate family relations like
parents, brothers, sisters, uncles, aunts, grandparents, cousins, and so on. It determines how
relationships with each of them will eventually play out. The house also determines how one’s
childhood will look like and whether the native will be greeted with affluence in the early years
of his life. The second house of our charts also deals with certain body parts like the eyes, the
neck, the mouth, nails, and teeth.

The Importance and Significance of the Second House in our Lives

The second house tells us that the proper use of our worldly and material possessions are
inevitably linked to changing our lives. If the resources we are blessed with are used properly
and to their highest value, we will be successful in obtaining more possessions, resources, and
financial risings and standings. Alongside these, the second house also deals with the realm of
family lives and relationships. Thus, a positive influence of planets in the second house will
mean we will be blessed with happy family life and feel content in the sphere of the family.
Although the second house does not form the base in astrological houses, it is definitely near the
base. This is because it lies right next to the first house and spans thirty degrees to sixty degrees
from the length of the horizon. Thus, the second house deals with the realm of fundamental
aspects, elementary aspects, and other elements that occupy a higher position in astrology and
kundali matching. The qualities of the second house are favored in kundali matching as strong
influence signifies that the native will have a good relationship with family and will be a family
man or woman.