THE SECRET BEHIND WHY NADI DOSHA IS SO FEARED 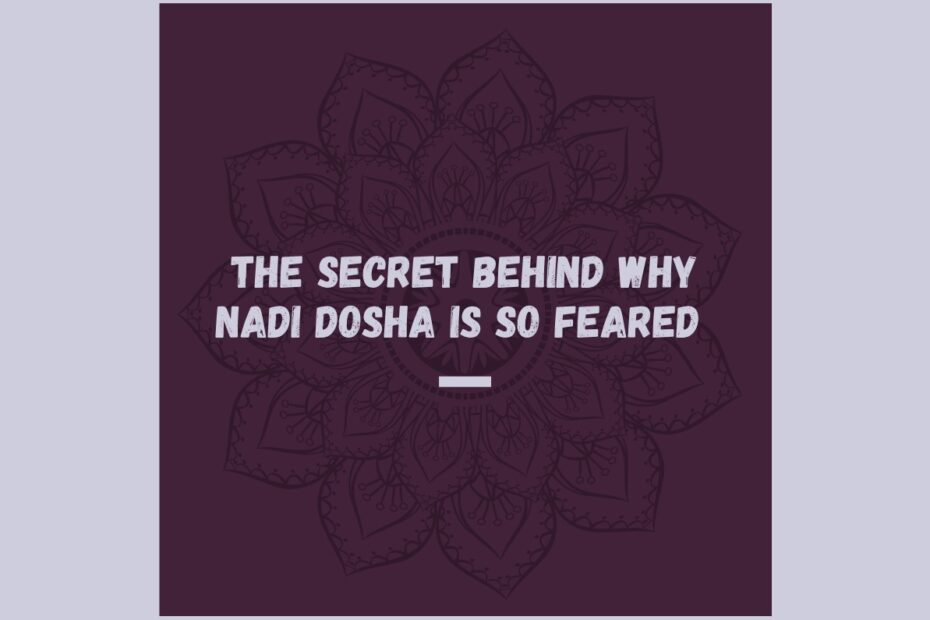 What is nadi dosha? Why is the whole idea or even the fact that you may have
Nadi dosha scary? Why is it considered to be this scary or why is it feared? Why
do couples who get their kundali matching done are always anxious when it finally
comes to the nadi koota? These questions are valid and understandable. To know
and understand what exactly Nadi dosha, is we need to know what Nadi koota is.
Now, Nadi koota is the last test of compatibility in gun milan process method in
kundali matching and is also the most important test in the process of kundali
matching and kundali milan.

So, why is nadi dosha so feared of? Are there no Vedic remedies for it?

To be specific, as we know, Nadi koota is the last one of the eight tests of
compatibility and also carries the most gunas as well. This is one of the reasons
why Nadi koota is so important and why Nadi Dosha is also feared because it can
make or break your kundali matching score. Coming to Nadi koota, there are three
types of Nadi being the Aadi nadi, Madhya nadi, and Antya nadi. To make sure
that there is no dosha, if the prospective groom should be Aadi Nadi, then the
prospective bride should be with Madhya Nadi or the Antya nadi. If this does not
happen or occur, then the Nadi Dosha forms in the kundali matching. The
individuals in the marriage cannot have the same Nadi because then it will not be
possible for the marriage to survive for long. There are Vedic remedies to lessen
the effect of the Nadi Dosha but to remove it completely will always take time.

What are the effects of Nadi Dosha on a marriage?

The major effects of the Nadi Dosha on a couple’s marriage is that the dosha
targets and affects the health of the individuals in the marriage as well as the health
of their future children as well. Apart from that, it also involves the lessening of the
mutual attraction between the individuals in marriage on different levels, from
emotional to mental to physical as well. To be more precise, the children of the
couple who are affected by the Nadi Dosha will be unhealthy or will be even born
abnormal. This results in the couple not having children at all as well, and this
issue could even cause serious damage to their relationship. Apart from this, the
couple will also face a lot of issues in their health and this could even cause the
early death of one of the partners. The individuals could even be in serious
accidents which could harm them fatally as well as they will always be suffering
throughout their relationship. This would or could even result in their relationship
and marriage deteriorating and not lasting for a long time. A married life full of sufferings, pain and hurt is not something anyone has in their mind when they
think of a married life and this is what makes Nadi Dosha so feared. You could
love the individual now, but when there is so much pain and suffering while the
two of you are together, it could even result in you associating that pain with love
and that could even result in you hating your partner or even the relationship the
both of you share. Nadi Dosha is to be feared if it does form in your kundali milan,
but there are ways and methods to lessen the impact and effect of Nadi Dosha on
your marriage, given by the Vedic astrology.

The Vedic remedies to lessen the impact of Nadi Dosha in your marriage:

Donate a cow to a Brahmin, and you can always donate gold to a Brahmin as well.
By chanting the mahamrityunjaya mantras more than one and a half million times
by the groom and bride, both. By performing a havan and donating food that is
almost half your weight. There are a few more remedies that will help you lessen
the impact of the dosha, but it would be advised to consult an Astrologer who will
be able to help you out and prescribe the best suited one for your dosha.