How well are we equipped with the concept of Kundali Matching in this Modern World! 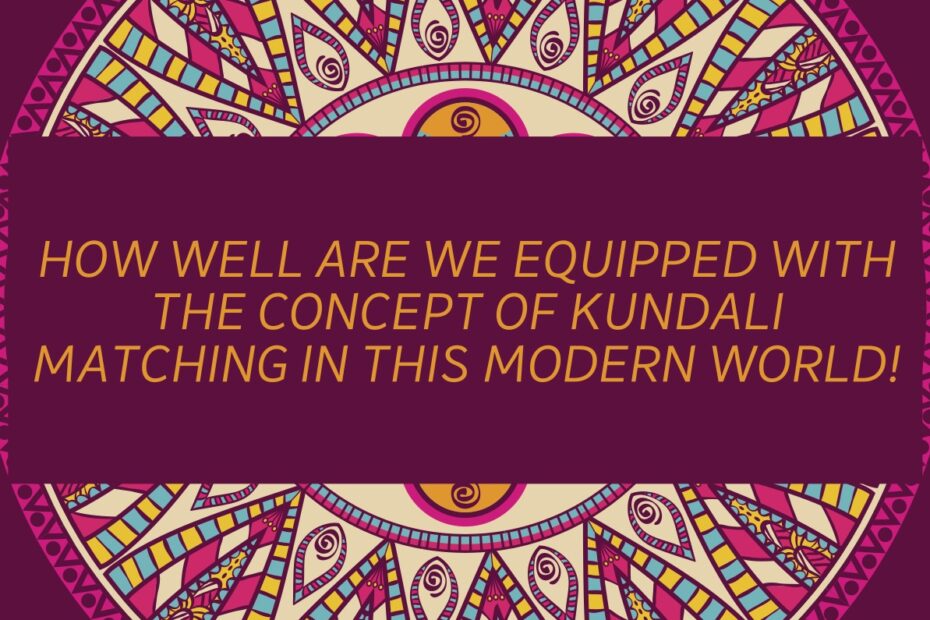 Are you choosing your better-half based on their Kundali? But how?

Kundali Milan is a custom exercised for a long time in Indian Hindu families to know the solidity of
the wedlock between the prospective bride and the groom. As we are very well-aware that astrology
predictions are formed based on the alignment of planets and stars and how this arrangement
mirrors an individual’s personality, moods, character, interests, temper, past, and many more.

Horoscope matching is simply a prediction of 2 individuals who have specific individual qualities that
are perfect to be together or not by looking over at their birth charts. Kundali Milan is determined by
a significant element “Guna Matching” which is checking the couple’s properties by specific
computations that can predict how powerful the pair’s relationship is going to be.

There 36 gunas (qualities) in total out of which, for a happy married life it is acceptable to have more
than 18 guna match, the greater the number the higher the stability, and if the number is less than
18, then that couple is not affirmed by Vedic astrology and such wedlock should not be thought of.
If the guna match is less than 18, then it recommends that the planets in horoscopes of both the
bride and the groom are conflicting. This is a very commonly utilized technique to check the belief of
the wedlock in Indian Hindu families and additionally, in arranged weddings where the two families
or individuals are partners and analyzing of characters or compatibility of natures gets tough to
determine. Thus, this technique is considered important and effective.

But does Horoscope Milan truly works?

It is believed that it is good to know the essence of an individual’s personality with whom you are
planning to spend your whole life. Because of the astrology of stars, alignment can observe an
individual’s different elements, for example, personality, mood, characters, and so on, and Kundali
Milan implies running computations over these elements of a couple of people and welcoming a
score on the desk dependent on these computations.

It is accepted to perform for a large number of couples but it does not guarantee anything, a lot of
pairs have ended up getting divorced even after having a decent compatibility score or Gun Milan,
and a few of them whose compatibility score is lesser than anticipated still living a cheerful and
happy married life.

At times all that appears amazing from an external perspective but the wedlock does not work well
as the stars are not lined up for the couple and many times there is a decent score for pairs
according to astrology however, nothing appears to perform well as elements, for example, liking,
willingness, personal choice, attraction, and many more likewise come in the frame.

How well is Kundali Milan perceived in Modern Society?

Kundali Milan is an old school practice to determine a pair’s life and compatibility after marriage.
From our folks to their predecessors, everybody has considered horoscope matching a significant
element when fixating on the wedlock of a couple but the present age does not appear to imbibe
this practice with ease as with time even mentalities of individuals have changed and pairs are
moving to pragmatic methodologies over believing in star alignment. Although, in current days
individuals must also know if anything like this was considered as being key elements to wedlock it
surely is quite crucial.

Just so this ancient practice does not lose its value and importance, current approaches of marriage
matchmaking are invented, now various sites provide online horoscope matching alternatives. Thus,
today’s youngsters can perform this activity with only a couple of clicks.
Many matchmaking applications are available in the industry which simply needs a couple of
fundamental details from your birth chart and will tell you your compatibility with your partner in a
matter of a few seconds.

Regardless of whether the source of these fresh techniques is authentic is questionable however at
At least the current age is trying to accept these ancient approaches to find their better-half stably with
the assistance of it.