Ensure a happy married life with Kundali matching by Nakshatra 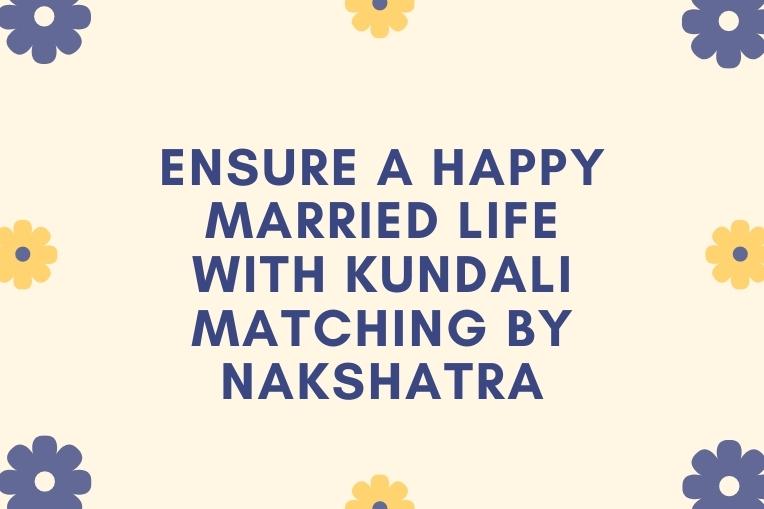 Marriages are considered sacred and the Hindus strongly believe in practices like horoscope matching or kundali matching by Nakshatra before initiating a marriage. It is considered to be an important necessity for a wedding in which rasi porutham and nakshatra of the two individuals, who are planning on getting hitched together, is analyzed.

Hindus are of the belief that the matching of stars is directly proportional to the compatibility between the spouses-to-be. It is also believed to specify the depth of intimacy between the couple building up in a long successful marriage.

Horoscope or Kundali Matching plays a vital role in marriage. Marriage is considered to be a holy union planned even before taking birth by Hindu Scriptures. Marriage is, without any shadow of a doubt, one of the most peaceful and beautiful moments in life. Everyone wants a compatible spouse with whom they can live their lives to the fullest and create some beautiful memories enjoying the jubilant journey. No Marriage is perfect, yet Kundali matching by nakshatra ensures a peaceful beginning and the areas of concern.

In Hinduism, kundali matching by nakshatra of both the individuals in question is performed in order to nullify any negativity after marriage. Astrology offers several remedies and solutions to break the hiatuses of the malefic effects of Doshas, if any.

Certain parameters are given by the Vedas to know whether a marriage of the individuals in question is preferable or not. There is scoring for each parameter.

The system of Kundali matching by Nakshatra requires the date, place, and time of both the spouses-to-be. In ancient times, astrologers would calculate the match manually and advise accordingly.

But now today it has become an easy task to arrive at the score automatically. Further, it is wise a to consult a learned astrologer. The gunas are the parameters. Matching these parameters of your life can result in a long-term happiness and compatible married life.

Kundali matching by Nakshatra results is a score, a comparison between the two natal charts is obtained. Health, family life, spiritual life, and growth in career can be depicted accurately in the matching.

Kundali matching by nakshatra is performed with kuta matching as specified by Harihara in his undying classic Prasna Marga. Nevertheless, it is impossible to match all the kutas and we must understand that nothing in this world is perfect and compromising at several places is important. Hence, a few compromises can be made in Kutas. However, the markings of five important kutas should not be compromised namely vasya, mahendra, yoni, Janma Rasi, and lord of the Janma Rasi. The three other kutas, gana, dina, and stree-deergha must also be taken into consideration. Furthermore, the Brahmins should also consider Gotra Kuta.